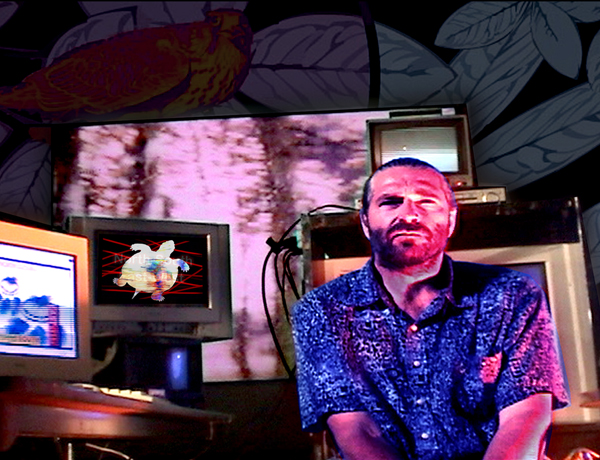 Thompson presented North-South-East-West at the An International Conference on
The Exchange of the Cultural Creative Design of International Indigenous Peoples at the  Chung Yuan Christian University of Chung Li District Taoyuan City  Taiwan, December 2005.

The North-South-East-West interface ( http://medicine-wheel.co ) illustrates Canada’s ancient past, its present day mass media culture, and its technological future. The piece is inspired by the meaning of the four sacred directions as taught by the Anishinabe Peoples of North America. The Ancient Medicine Wheel and its four directions help us to see where we are and in which areas we need to develop. 24 modern computer generated animations offered by the interface provide an alternate tomorrow that is connected closer to the earth.

From the Web site http://medicine-wheel.co, visitors load the interface. The interface scales to fill any size of monitor screen, Since it uses scalable vector graphics, the animations are played at the highest resolution, The initial map sequence shows southern Ontario, the industrial heart land of Canada,  A land with a past, a present and future. The Past Symbolized by Rolling Horizon

The prominent symbols are based on rock carvings from the Canadian Shield. Actionscript programming techniques move the visitor forward in time through a rolling horizon.

Future as an Off-Planet Colony

Looking into our future, at a world whose natural resources have been depleted, Man ventures forth into the universe.

Global communications provide car chases, a constant rhythm of violence, and an environment saturated with electromagnet transmissions. Looking through the portal of a computer display we see the blue Mediterranean sky. 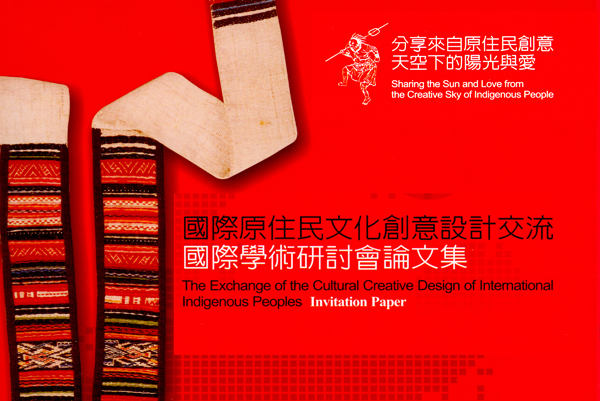 International Conference of the Creative Design 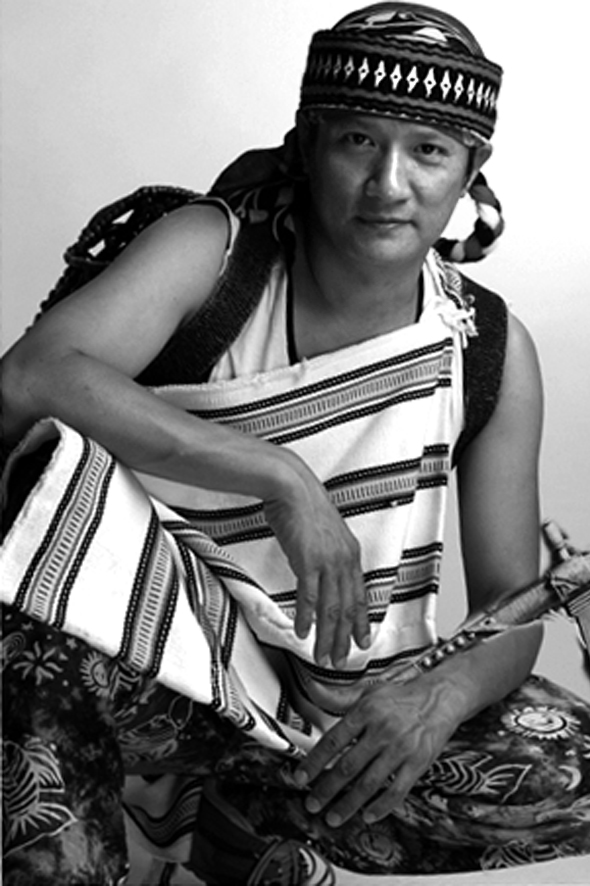 The Department of Commercial Design

The Department of Commercial Design at Chung Yuan Christian University was founded in 1984, as an academic unit under the College of Business. In 1992, the university established the College of Design which was the first of its kind in the nation. The college now consists of Departments of Commercial Design, Architecture, and Interior Design, and Landscape Architecture. In 1999, the Department began to offer Master Degree Programs, including a Master Degree Program for Working Professionals. The curriculum comprises of four core areas: design, humanities, technology and marketing. The objective of both undergraduate and master degree programs is to nurture students becoming strategic thinking and problem-solving design professionals.

Tsai Ing-wen (蔡英文) won the Presidential election of Taiwan on January 16, 2016 by a large margin, earning 56.1% of the votes versus 31.0% for the runner up, Eric Chu (朱立倫). The election results signaled a turning point in Taiwan’s democracy, with the Democratic Progressive Party winning a majority of the seats in the Legislative Yuan (the lawmaking body) as well.  Tsai accepted the “will of the Taiwanese people” as a sign that citizens wanted a significant change from former failed policies and unfulfilled promises. 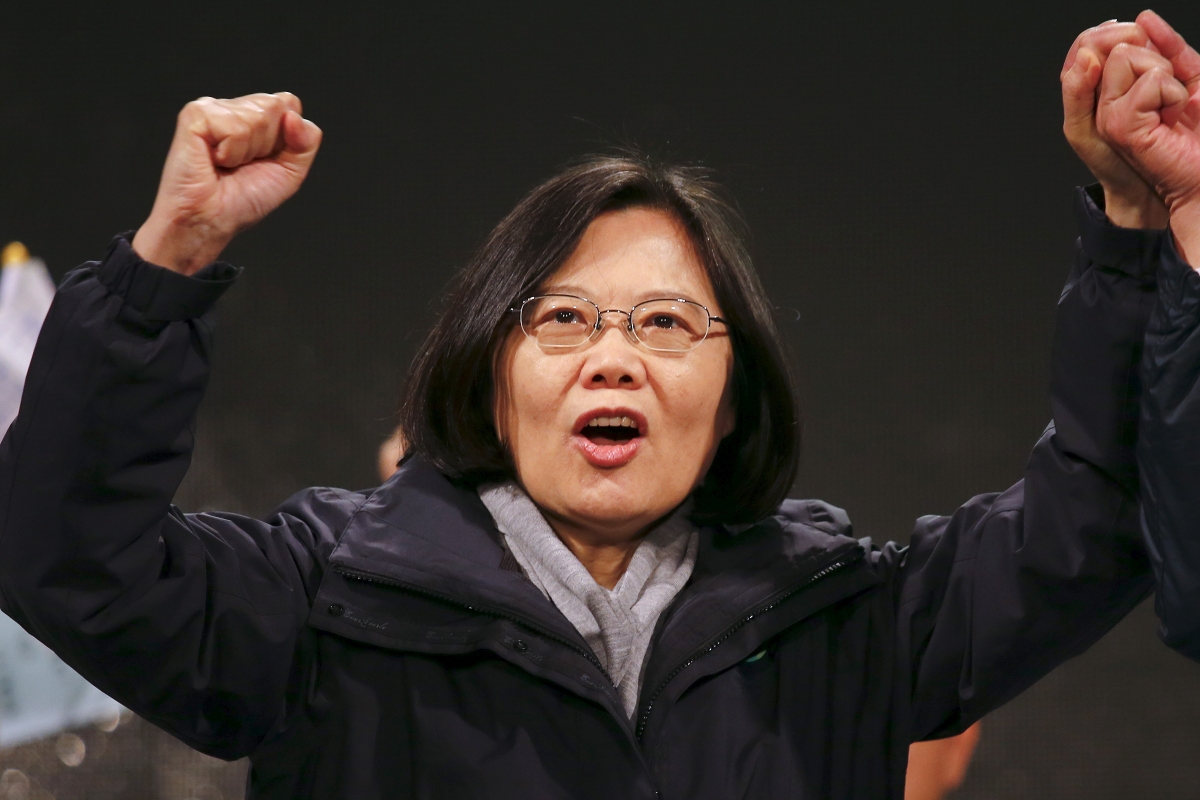 Tsai Ing-wen (born 31 August 1956) is a Taiwanese politician currently serving as the President of the Republic of China, commonly referred to as Taiwan. Tsai is the second president from Democratic Progressive Party (DPP). Tsai is also the first woman elected to the office.[1] She is also the first president to be of Hakka and aboriginal descent (a quarter Paiwan from her grandmother), [2] the first unmarried president, the first to have never held an elected executive post before presidency, and the first to be popularly elected without having previously served as the Mayor of Taipei. She is the incumbent chairperson of the Democratic Progressive Party (DPP), and was the party’s presidential candidate in the 2012 and 2016 presidential elections. Tsai previously served as party chair from 2008 to 2012.

When the President announced she would make a formal apology to Indigenous Peoples on behalf of the government, some were surprised and hopeful, but many were apprehensive and doubtful that it would lead to much change. Doubters referenced the Indigenous Peoples Basic Law, established on February 5, 2005 during the Chen Shui-bian administration, claiming that it did not adequately protect their rights, especially when their traditional practices conflicted with Taiwan’s laws. Pessimism among Indigenous people also came from promises made by former President Chen, which did not materialize.

Leading up to the formal apology, Indigenous leaders and protestors expressed their hopes to see improvements in a variety of issues, such as land rights, hunting rights, and tribal autonomy. There was concern that various Indigenous groups would fight over limited resources offered for reconciliation, especially if the government includes the Pingpu (lowland) tribes, which are not officially-recognized. There was concern that the new policies would be made without direct consultation with Indigenous Peoples and communities. Most took a wait-and-see approach, and wanted to see policies that would be meaningful and enforceable. They wanted to commission to be able to have the legal power to investigate past abuses. A professor at National Dong Hwa University reminded indigenous people that the seeking of truth and justice would be complicated, as this was “a crime with no perpetrators, and no beneficiaries – but only victims.”

The formal apology to c took place on the hot, sunny morning of August 1, 2016, which the President’s Cabinet officially declared as the national Indigenous People’s Day. Indigenous leaders from every recognized Taiwanese tribe dressed in traditional outfits and regalia entered the front entrance, greeted by the President. After the doors closed, protesters, consisting of activists who had walked for hundreds of kilometers from their home villages, and had been occupying the street in front of the presidential palace since the previous night, rushed towards the entrance, wanting to be heard. They were held at bay by a police with riot shields, and no one was hurt.

The president’s speech surprised many for being both substantial and specific.  The acknowledgment of  responsibility was clear and direct.