The North-South-East-West Web Site presented at the Thailand 3rd New Media Arts Festival – MAF05, in Bangkok Thailand. This exhibition of NetArt, curated in June 2005, is an International Summit on Creativity in Multimedia & Communications. The event presents a series of audio-visual programs, performances and presentations that explore the growing interest in electronic arts and new media in Thailand.

Opening: 25 Jun 2005, the Thailand New Media Arts Festival 2005 is Dedicated to the exchange, innovation and celebration of ideas in the merger of art and technology. The Third Annual Thailand New Media Art Festival 2005 includes a special ‘invitation only’ opening night event at the Playground, 2nd Fl, Sukhumvit 55, Tonglor (next to Thonglor police station) on Saturday, 25th June 2005, 6:00 pm. 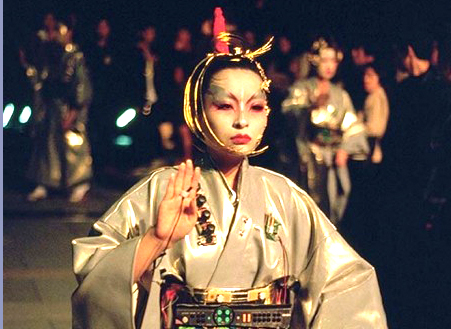 The schedule for the week will include exhibitions at the Playground from 12:00 pm – 9:00 pm, and workshops at the British Council (Siam Square) by visiting artist U-Zone from 3:00 pm – 6 pm on 26-28 June, as well as open-air screening of video-art on ake-A-Look open air screen located at Bangkok Central Word Plaza. 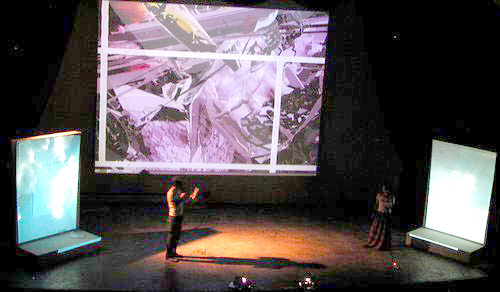 “Art is a way of life for Thais, whether it is traditional mural art, or post-modern installations, art isn’t defined with stereotypes; it’s constantly redefining itself to suit the needs of contemporary Thais.  Art is a reflection of a culture.  And with Thai art it’s a fine balance of traditional art forged with new contemporary ideas, making the local art scene fertile for fecund movements to spring.  ”

This is what attracted Francis Wittenberger to Thailand in 2002 to establish the New Media Arts Festival as part of the Institute for Cultural Exchange and Computer Arts Thailand (ICECA).  The festival was a three week event spanning March and April 2003.  The timing was perfect because of Thai New Year celebrations with the Songkran festival.  Over 4000 visitors came to the first Media Art Festival at ChiangMai University.

Wittenberger is a Hungarian/Israeli inventor, artist, and musician.  He studied with the St. Petersburg artist Boris Svirsky from 1982 to 1989 and they co-founded the avant-garde electronic noise band SHARMUTA FLYING IN THE MOUNTAINS in 1986. Wittenberger and Svirsky developed the series of PARANOIDICO electro-acoustic synthesizers and transformed the Israeli underground music scene with their performances. Wittenberger eventually left Israel and continued his new media activity in Germany for 8 years, then to Thailand.

Francis Wittenberger is a good friend of mine and I work for him as a translator. Almost a year before the first festival took place, he came to work in my office behind the Holiday Inn in Chiang Mai.  He needed someone to translate his project papers from English to Thai. At that time I was an instructor in the Faculty of Industrial Engineering and taught a seminar for the fourth year students. He needed someone who spoke English and Thai and I began working with him as the Thai director of the festival.

In an interview with the Bangkok Post,  he outlined his initial work in Chiang Mai and his expectations that Chiang Mai could become a hub for new media art. Strong IT infrastructure, coupled with an Internet culture and a dynamic society to embrace it — most Thai students use email and spend considerable hours surfing the Web at internet cafes — has put Chiang Mai in the front seat of this IT revolution.

Chiang Mai has just been declared Thailand’s IT CITY by the Ministry of Information Communication Technology. A DesignCenter and a SoftwarePark are being developed at ChiangMaiUniversity and a related campus. Both The Design Center and the SoftwarePark will help the development of the local software industry and provide qualified professionals to support local business. This will not only make Northern Thailand famed for its festivals, but also for its technological initiative.

Thailand is openly embracing new media art, a linear extension of contemporary art that combines new technology and lateral thinking, facilitating new meaning from preconceived traditions. The IT revolution is bridging cultural difference and enabling an exchange of traditional ideas that collectively celebrate diversity while pushing the boundaries of art in a modern context.

Media art in Thailand is now at a critical point in its realization. The IT infrastructure is rapidly maturing and facilitating new art expressions, therefore, making new media art an exciting new field for Thais and providing a platform for new ideas for the IT prospect.”

His house was not far from my office, it was a very nice space with a large garden and bamboo fences, and Francis lived there with his Thai girlfriend and a dog. He rented a house for artist friends to plan the festival and he told me that the accommodation sponsor was some foundation for media arts in Berlin. Francis can work under pressure in the land of a thousand smiles. He likes Thailand very much as a place to live and considers the country different from anywhere else in the world.

We eventually set the terms of the ICECA foundation, started its mission in the northern city of Chiang Mai and created the first collaboration with Chiang Mai University’s art museum in early 2002; linking European media artists with a Thai institution. A vision of bridging cultures through new media arts proved successful from the earliest stage and soon this small-scale series of cultural exchange activities turned into an ambitious project: Thailand’s First New Media Art Festival.  Though realized on a shoestring-budget the festival was  successful and initiated a sudden interest in new media in Chiang Mai.

The Initiative for Cultural Exchange and Computer Arts is a non-profit foundation formed in 2001 and officially founded in 2002 to promote cultural exchange between Thai artists and new media artists from around the world. Furthermore, we aim to establish the Center for Art and Media (CAM Thailand) as well as a networked, public access New Media Art library. To date, ICECA has organized visits for over 20 artists from Europe,Japan,Israel and Australia, providing accommodation for their stay in Chiang Mai.

At the present time the genre of new media art lacks an established forum in this region and, therefore, ICECA’s main objective is to create a Center for Art and Media and encourage the growth of a supportive environment. ICECA, active for over one year in Chiangmai, regularly conducts free-of-charge workshops and lectures by visiting artists. ICECA is also maintaining its own independent network for international Cultural Exchange.

ICECA is the founder and major organizer of Thailand’s First New Media Festival which took place in Chiang Mai in cooperation with several partner institutions. The Festival is planned to take place annually on the CMU campus and consists of simultaneous exhibitions, conferences, art film screenings and media art workshops.

A special effort will be made to translate all possible material into Thai language and introduce a special Thai glossary of new media art and other technical terms. The library will also include an adaptive indexing system that captures user interaction and uses it to aid other users. After ICECA’s digital library is installed it will be easy to access from any location where high speed internet or local area connectivity is available.

The Thailand New Media Art Festival 2004 aimed to serve the art community by being a platform and a motivator – enabling both Thai and international artists to exchange ideas. We wished to encourage Thai artists in their new media work and provide them with networking opportunities and new channels of communication with foreign artists.

The increasing use of communication technology in Thailand combined with the unique Thai lifestyle and culture creates an excellent environment for new and exciting media art to emerge and fertilize the global art scene.

In 2004 the Festival was hosted by Srinakarinwirot University in Bangkok and was a collaboration with the Imaging Department of the Faculty of Fine Arts SWU, Alliance Française Bangkok, The Goethe Institut Bangkok, The British Council Thailand, The Oddyssee Siam, Banrie Café, and Media Shaker Siam.

The Festival in 2004 hosted works from over 30 countries. The works presented dealt with many topics associated with New Media in all forms. The Festival took place at 7 venues linked by the Bangkok Sky-train (BTS). We welcomed all residents of Bangkok city, its inhabitants, tourists, casual visitors, Thai artists and especially Thai students and teenagers to enjoy a week of contemporary media art events, exhibitions, workshops and intellectual discussion.

Over a dozen visiting artists, media professors, and performers presented their ideas in seminars, workshops, symposia and screenings. Admission to all events was free.

The Thailand New Media Festival 2005 was dedicated to the victims of the tsunami and fostered global solidarity and cultural rebuilding. Alongside international forums, there were performances, screenings and lectures by international visiting artists. The festival was in two sections: during February and June.

The MAF05 in June was planned as a full scale multi-media extravaganza on a scale never seen before in Thailand. The festival drew on the innovations of MAF’s recent annual new media festivals and was especially linked to the first part of MAF05 in February. MAF05 June hosted a full range of lectures, presentations, exhibits, interactive installations, and performances.

MAF05 June’s innovation was the Thai Commissioned New Media Art section – a first in the history of contemporary art in Thailand. Financial grants awarded to young Thai artists support the creation of original media art and this art was highlighted both at this festival and abroad, at partnering arts festivals.

MAF05 June also presented our partnership with international curators as a platform for the exchange of ideas. MAF05 June established exchange links with BananaRAM Festival to offer a selection of multi-user interactive network exhibits: with ArtBots Festival from the USA to bring a selection of art-making-robots to Thailand; and with The IDEA from India to present a show of net-art, digital-imaging, interactive and sound projects.

MAF05 presented a large array of screenings, lectures, performances, and presentations as well as exhibitions and installations in two separate parts. Over 200 international new media artists from 42 countries presented their cutting edge work on the vital topic of the effect of digital technology on our notions of boundaries.

MAF has established a strategic alliance with the Bangkok based media creations company Modern Formulations Co. Ltd. and with the London Development Company Ltd. MAF06 will be the third time MAF works in a joint event production environment with Oxygen Holding’s BED Supperclub and for the fifth time with the new media department at the Czech Academy of Fine Arts, under the supervision of Professor Michael Bielicky.

Our network extends annually to working with local and international institutions such as the British Council Thailand, formerly with the Alliance Francais Bangkok, the Goethe institute, the Academy of Media Arts in Cologne and others. During each year’s festival the collaboration extends to working directly with many individual artists, co-curators and various venues to host smaller MAF events across Bangkok.

MAF06 features a new collaboration with the Bangkok non-profit events organizer Dude/Sweet, best known for their fine networking in the local art scene. Dude/Sweet will act as our event promoter.

MAF06-May takes place in Bangkok at several locations, among which are some well known venues, and indoor and outdoor public screens. Confirmed venues include: BED Supperclub with exhibitions, performances and an opening party. HOF Art Gallery with an exhibition and closing party. Chulalongkorn University with workshops and special presentations.

In May 2006, MAF06 will present the first part of the festival with a series of audio-visual programs, performances and presentations that explore the growing interest in electronic arts and new media in Thailand since we first organized MAF.

For those who see MAF as the window into which they can view the development of new media in the region, we send the message that “new media is here to stay”. MAF is exploring the opportunity of setting up a permanent not-for-profit Center for Arts and Media in the heart ofBangkok. In recent years, Bangkok has experienced a dramatic increase in interest because of the developing range of new media arts and creative design taking place in the city.